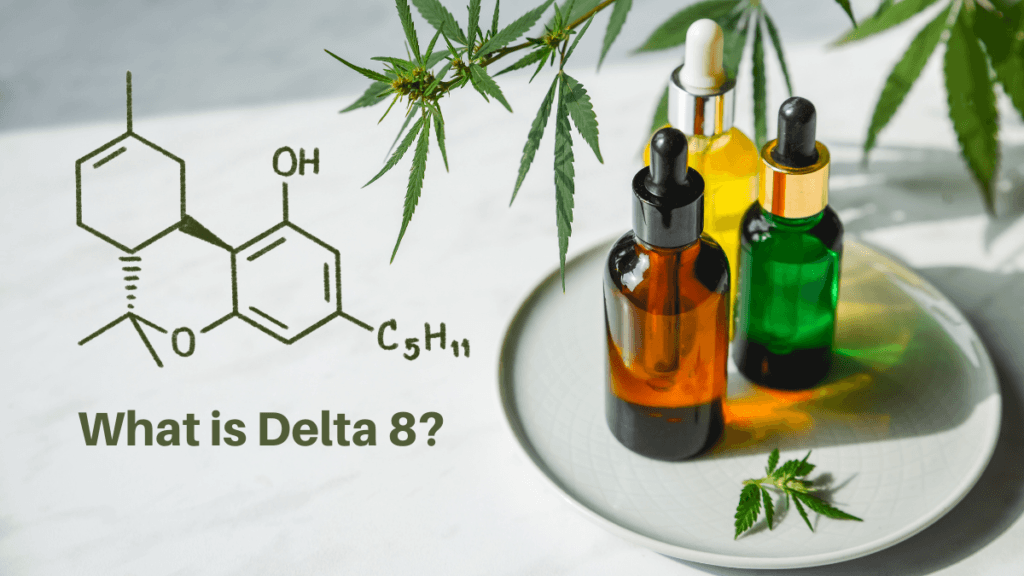 Delta 8 THC has become a popular choice for people that benefit from Hemp CBD products. Below you will find direct information provided by Discover.com and Hightimes.com.

Delta-8-THC Promises to Get You High Without the Paranoia or Anxiety.

Delta-9-THC, the main drug in cannabis plants that gets people high, can also be a potent medicine. It can treat extreme nausea and stimulate appetite, which is especially helpful for people who have HIV or are going through chemotherapy. A synthetic version of THC, called Dronabinol, has been used to treat these conditions since the 1980s, although some people prefer their THC to come from the plant itself.

But while marijuana is a relatively mild drug with few side effects — at least, compared to alcohol or tobacco — too much Delta-9-THC has its downsides. It can sometimes spark paranoia and anxiety or trigger dizziness and headaches. And it’s worth noting that much of the cannabis sold legally in the U.S. contains a high THC concentration.

That’s why many cannabis consumers are turning to an obscure analogue of Delta-9-THC called Delta-8-THC. The difference between Delta-8 and Delta-9 is subtle: Both will get you stoned, but the former is about half as potent as the latter. Many people claim that Delta-8 is a smoother, less anxious psychoactive experience than the more familiar Delta-9. It also seems to have additional medicinal effects than regular THC, such as better pain relief, but these claims have yet to be weighed out in clinical trials.

Based on these anecdotal reports, Delta-8 is quickly becoming a trendy new cannabis product, appearing in products like vape cartridges, soft drinks, gummies and tinctures. The rise in popularity mirrors the CBD (cannabidiol) craze before it and, like with CBD, there still isn’t a lot of quality control for products or evidence to back up anecdotal accounts. Many of the same positive claims are made about Delta-8 products — though scientists have yet to study their effects in depth.
A Subtle Shift

The cannabis plant is essentially a factory for dozens of different compounds called cannabinoids. The two most popular are also the most abundant: Delta-9-THC and CBD. But the plant also makes many other so-called minor cannabinoids, including CBG, CBN, THCV and, of course, Delta-8-THC. Most cannabis plants produce very small levels of Delta-8, so to get a usable amount takes a lot of processing and refinement. However, Delta-8 is more shelf-stable than Delta-9, which could make it a better option for prescription drugs.

So that’s it? Could the shift in a single carbon bond really cause such a difference in experience? Based on the limited science available, the answer seems to be yes.

“I think it’s been shown that there’s a difference,” says Peter Grinspoon, a primary care physician at Harvard Medical School who specializes in medical marijuana. “People report [Delta-8] as being less anxiety-provoking, less sedating and a little more clear-headed than THC.”

Grinspoon is a board member of the advocacy group Doctors For Cannabis Regulation, which seeks to provide patients with evidence on the pros and cons of medical marijuana. He says Delta-8 has game-changing potential for patients, such as the elderly or children, that are looking for “less confusion and spaciness or stonedness or whatever you want to call it.” But he cautions that the alleged benefits of cannabis-based drugs shouldn’t supersede the evidence.

“Whenever there’s another minor cannabinoid that people start puffing up, I always worry that the marketing claims and the desire to line people’s pockets is going to outpace the actual science,” Grinspoon says.

“The research isn’t there yet to know for sure,” Peterson agrees. However, he does note that Wunder did extensive tests to rule out the placebo effect in their products.

But before the market for Delta-8-THC products can get anywhere close to the current demand for CBD, entrepreneurs and doctors need to know: Is it even legal?
Rules and Regulations

Delta-8 has a complicated, hazy legality. There’s no question that Delta-9 is highly illegal: Under U.S. federal law, regular THC is a Schedule I substance, which means the government classifies it as dangerous as heroin and LSD. This law, which was passed in 1970, makes research on cannabinoids expensive and difficult — part of why we know so little about Delta-8.

But there was no explicit law banning Delta-8 until this August, when the U.S. Drug Enforcement Administration (DEA) updated their list of controlled substances. A lot of the confusion stems from where Delta-8 is sourced. If it comes from Cannabis sativa, it’s definitely illegal. If it comes from hemp — a form of the same plant, bred with nonintoxicating levels of THC — then it’s legal thanks to the 2018 Farm Bill. Or, so a lot of cannabis companies assumed.

“The entire industry … was assuming it was legal due to it being derived from hemp,” says Ryan Cassell, co-founder and chief scientist of Crystal Creek Organics, a cannabis company based in Pensacola, Florida. “The laws clearly define all hemp-derived cannabinoids and products with a Delta-9-THC level below 0.3 percent as legal.” But shifting, ambiguous laws have some in the industry concerned about a DEA crackdown on hemp farms, according to Marijuana Moment. The convoluted mess of regulations since hemp was legalized has forced the USDA to reopen a public comment period to address some of these changes and the impact they have on the industry.

“We shall see how all of that plays out in the coming months,” Cassell says. “As for now, our company has had to take a step back [from production] and wait for further clarification surrounding the laws and legal status of Delta-8.”

In the meantime, it’s not clear what the future holds for Delta-8. Consumers definitely seem eager to try new, obscure cannabinoids, say both Cassell and Peterson, but whether they can legally purchase them outside of states where recreational cannabis is legal, or whether scientists can easily study them, is still being smoked out.

The hemp industry’s latest hype is Delta-8 THC, a unique chemical compound located within the cannabis plant that delivers remarkable benefits and the psychotropic effects that enthusiasts have been craving. The unfortunate part about the cannabinoid is that it hasn’t received quite the attention its close relative, Delta-9 THC (the popular psychoactive compound in marijuana known for producing the high), has received, therefore greatly limiting research involving the cannabinoid. Despite the limited research, here is what we know about Delta-8 THC and how it’s different from CBD.
What Is Delta-8 THC?

While it isn’t the most popular cannabinoid found in cannabis, it is one of the four most prominent out of more than one-hundred compounds that naturally occur. Delta-8 THC delivers psychotropic effects, yet it is less potent than its close relative, Delta-9 THC. It also occurs in very small concentrations, which increases its value due to the intricate process that involves extraction, isolation, conversion, and refinement. Though it is a complex process to obtain large concentrations of Delta-8 THC, there are methods of creating Delta-8 THC that are less difficult.

All in all, Delta-8 is a powerful cannabinoid that has a lot to offer. It is an isomer of CBD and a derivative of hemp and CBD and is completely legal if the final product contains less than 0.3% Delta-9 THC.

What Is Delta-8 THC and How Is It Different from CBD?

The Difference Between Delta-8 THC and Delta-9 THC

Besides the bonds, the Endocannabinoid System’s (ECS) receptors react relatively similarly, they both present a similar structure, and they also share many similar properties. If you’re missing out on all the fun and benefits of THC common in marijuana, you will be thrilled to learn that both Tetrahydrocannabinol cannabinoids serve the same purpose as one another, acting as the ideal solution for both medicinal and recreational use.

While they are different compounds with many similarities, there isn’t too much that separates the two. They both bind to the CB1 receptor and offer psychotropic effects; however, Delta-8 THC is half as strong, delivering a lower potency, which some find more tolerable and suitable for recreational use.
What Is Delta-8 THC and How Is It Different from CBD?

When it comes to the comparison of Delta-8 and CBD, the differences between the two are a bit more balanced than the similarities Delta-8 and Delta-9 have. This is because CBD is chemically much different from Delta-8 THC. For instance, Delta-8 is a psychoactive cannabinoid, and CBD is not. Additionally, scientists have conducted research on CBD much more and the benefits that it offers are vast. Here is a brief list comparing the two to show the differences between them.

Delta-8 THC
CBD
What Is Delta-8 THC and How Is It Different from CBD?

Though many may find the legality of Delta-8 THC confusing, it is indeed federally legal in most states. The legality of hemp changed because of the 2018 Farm Bill, which is also known as The Agricultural Improvement Act of 2018. With the new law, it specifically states that all derivatives, isomers, and cannabinoids in hemp are legal provided that the final products contain less than 0.3% Delta-9 THC.

What is quite fascinating is that cannabis has been federally illegal since the 1920s, though under the eye of the law, millions of people have continued to use it. The Government has portrayed cannabis in the most negative way, yet hemp is now federally legal, and marijuana is legal in some states medicinally and recreationally.

What Is Delta-8 THC and How Is It Different from CBD?

Though there is a lot to be discovered about Delta-8 THC, it is slowly moving along, and people are becoming even more familiar with the quite incredible cannabinoid. Manufacturers have found new methods that allow them to convert CBD into Delta-8 THC, giving them the ability to generate high concentrations. As a result, there are many products emerging onto the market utilizing Delta-8 THC. One of the best Delta-8 products includes Delta-8 THC Cartridges; Like Cannabis – Delta-8 THC Carts come in Indica, Sativa, and Hybrid strains.